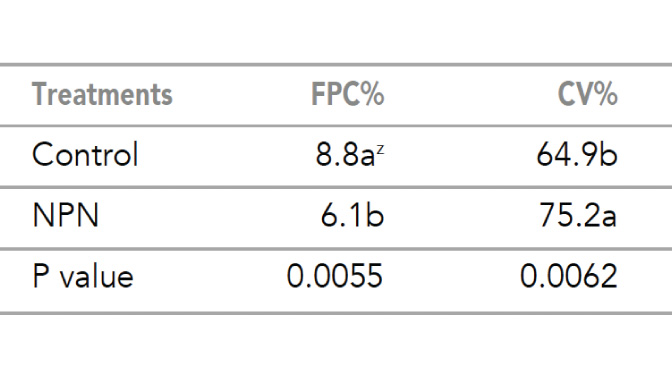 We thank CP Mouton and Conrad Vorster for allowing access to their orchard at Houtkaprug in Citrusdal, and Citrus Research International (Pty) Ltd and the Department of Science and Technology (SIF-RCE) for financial support. We also express our appreciation to Drape Net SA (Pty) Ltd for providing the nets.

In Citrus spp., non-permanent netting (NPN) is used during a particular stage in the sea-son to protect trees and fruit from damage that could be caused by hail (Wachsmann et al., 2014). It is used in some cultivars dur-ing flowering, to exclude bees, preventing cross-pollination and seed development (Gambetta et al., 2013; Gravina et al., 2016; Otero and Rivas, 2017). However, it is unclear how the covering of trees with NPN before, during and after flowering impacts on the deposition of foliar sprays applied, insect pest prevalence and fruit production. The objectives of this study were to evaluate the effects of NPN on these aspects in the production of “Nadorcott” mandarin fruit.

To evaluate the effects of NPN on foliar spray deposition in the tree canopy, control and NPN treatments were sprayed in January 2018 and in June 2018 at different water volumes, with a
2 000 L oscillating Nieuwoudt spray machine. The January sprays were applied at volumes of 3 500 and 15 000 L·ha-1. The June sprays were applied at volumes of 3 500, 7000 and 15 000 L·ha-1. Each foliar spray contained fluorescent pigment allowing for visualisation of the spray deposition on the leaf and fruit surfaces. Leaves and fruit were sampled from three uniform trees within the respective treatment replicates. For the January evaluation, only leaves were sampled; whereas fruit and leaves were sampled for the June evaluation. Samples were collect-ed from different tree canopy positions: three vertical positions, viz. top, middle and bottom; and two horizontal positions, viz. inner canopy (leaves 30 to 50 cm inside the tree canopy) and outer canopy (leaves or fruit on the outside
of the tree canopy). Deposition quantity was measured as the percentage of leaf or fruit area covered by pigment particles, i.e. the percent-age fluorescent particle coverage (FPC%). De-position uniformity between leaves or fruit was calculated as the uniformity in pigment deposition in a batch of 12 leaves or five fruit (standard deviation × 100/mean) and referred to as CV%.

False codling moth (FCM) was monitored using a yellow Delta trap containing a sticky floor and a pheromone lure to attract males. Mediterranean fruit fly was monitored using a Sensus trap containing a Capilure (trimedlure) capsule and a small dichlorvos-impregnated block, to attract and kill male fruit flies. Traps were placed in the tree canopy in one control, one NPN August to March, and one NPN August to July replicate. The farm was included in the commercial area-wide Xsit Sterile Insect Release programme. Both wild and sterile FCM males were therefore monitored by traps.

Leaves were sampled according to the South African citrus industry standard (Du Plessis 1977; Du Plessis et al., 1992; Du Plessis and Koen, 1992). Mineral nutrient analyses in leaf samples were conducted by an accredited commercial analytical laboratory. The concentrations of the mineral nutrients in the leaf were expressed as mg·g-1 leaf dry weight (DW) for macronutrients, or mg·kg-1 leaf DW for micronutrients.

Fruit surface damage evaluations were done at the time of commercial harvest in July 2018, on the same fruit that was used for fruit quality eval-uations. All the fruit was examined for sunburn damage, light or severe wind damage, and any evidence of pest damage or chemical burn.

The NPN treatment effect results on leaves in June showed that, irrespective of the foliar spray volume, significantly more fluorescent pigment was deposited on leaves of control trees com-pared to leaves of NPN trees (4.8 and 3.1 FPC%, respectively) (Table 2). Comparison of the CV% in trees from the different NPN (covered vs. open) treatments showed that CV% on leaves of control trees was better compared to leaves of NPN trees (59.6 vs. 80.5 CV%), irrespective of foliar spray volume (Table 2).

The average number of weekly sterile FCM male catches in the control traps relative to the NPN treatments, was considerably high (Fig. 1A). A few sterile moths were caught in traps that were under the NPN (Fig. 1A). Trap catches of wild FCM were very low for the duration of the experiment. No wild FCM males were caught in the NPN treatments during the times when the netting was in place (Fig 1B). Wild FCM males were only caught in the control treatment and in one of the NPN treatments after the netting had been removed. Regarding fruit flies, the same pattern was repeated as for FCM with catches greatly reduced beneath the NPN (Fig. 1C).

Table 2. Effects of non-permanent netting (NPN) on deposition quantity (FPC%) and deposition uniformity (CV%) of foliar sprays on the leaves of “Nadorcott” mandarin in June 2018

Table 3. Mean deposition quantity (FPC%) and deposition uniformity (CV%) values for the significant foliar spray water volume × treatment interaction on the fruit from non-permanent netting (NPN), or control trees sprayed at either 15 000, 7 500 or 3 500 L·ha-1 in June 2018

z Different letters in the same column denote significant differences between values at the 95% confidence level.

The NPN treatments had no significant effect on fruit rind colour, juice content and juice Brix°, compared to the control.

Fig. 3. Wind damage of fruit from all treatments a) inside and a) outside tree canopies of control and non-permanent netting (NPN) treatments at time of commercial harvest in July 2018

In general, the use of NPN in the production of “Nadorcott” mandarin reduced foliar spray deposition on leaves and fruit, resulting in lower concentrations of certain micronutrients in leaves. In trees where NPN was removed before July, yield was reduced by up to 37%, but a longer NPN treatment resulted in similar fruit yield compared to the control. The lower fruit yield in short NPN treatments was probably caused by fruit drop exacerbated by the physical removal of NPN. The use of NPN had no effect on commercial fruit quality attributes and where the NPN treatment was applied until fruit harvest, sun-burn damage of fruit was reduced by 17%; outer canopy fruit suffered increased wind damage or scarring. Citrus growers in very windy areas should, therefore bear this in mind if considering making use of NPN.