The Complexities of Grapevine Breeding : Apr / May 2021 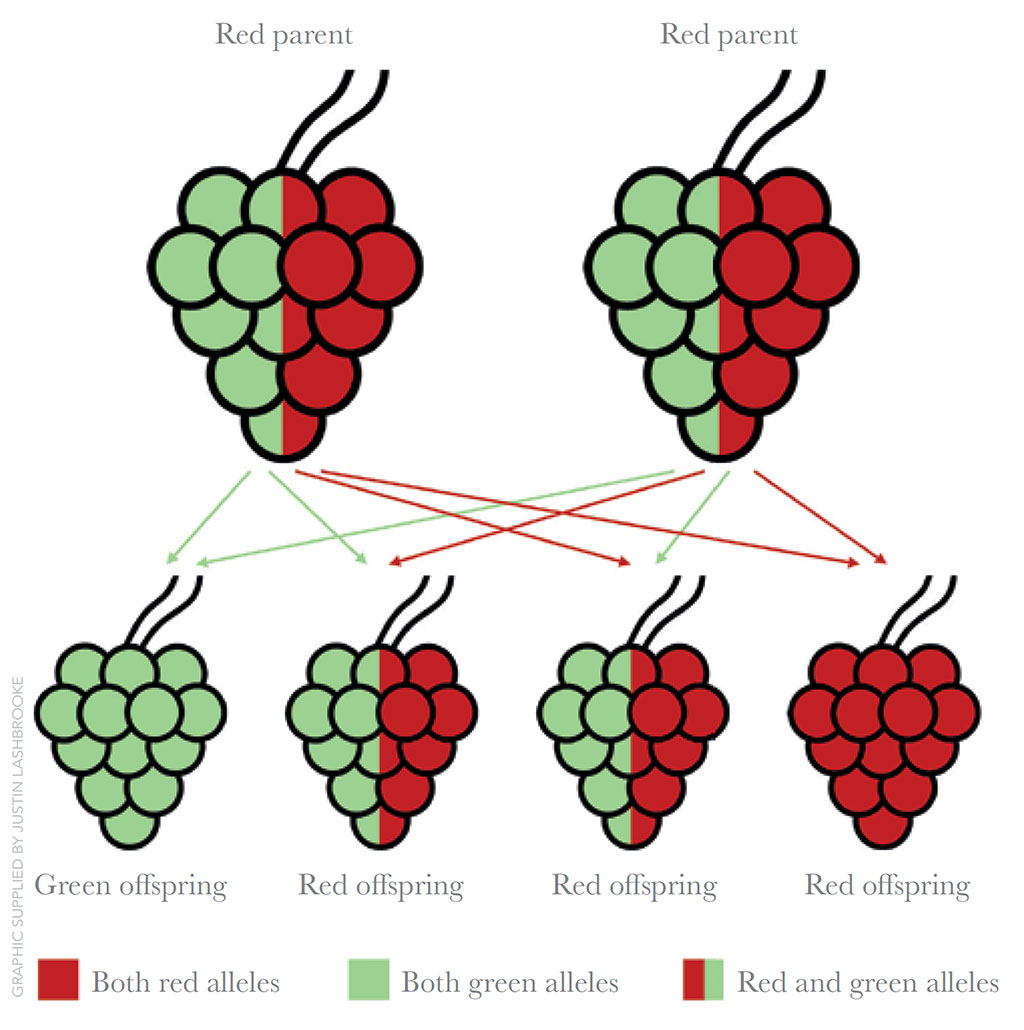 There are several challenges that one may be faced with when breeding novel grapevine cultivars. Chief amongst these is the large investment of both time and financial resources without the guarantee of desired outcomes. By Justin Lashbrooke (Researcher, SAGWRI, Stellenbosch University)

Prior to the advent of molecular breeding and marker assisted selection there was little that could be done to overcome the fact that crossing two parent lines possessing traits of interest did not necessarily result in progeny with those same traits. In theory marker assisted selection allows us to breed in a more targeted approach and maintain all the traits in which one is interested. However, in practice, in grapevine, this is not necessarily the case. Primarily this is because, outside of mildew resistance, extremely few genetic markers have been developed for grapevine. What this means in practical terms is that researchers are yet to link genetic variation with traits.

It is important to understand why this is the case, as it has implications on how we should view and think about the local grapevine germplasm. Grapevine is a diploid organism, which means that it has two copies of each chromosome, and thus two alleles for each gene (one on each chromosome). This means that in a single plant two versions (alleles) of almost every gene exist. At the genomic level grapevine is considered to be extremely heterozygous, meaning that allele pairs show a high level of variation between each other. This is important because it means that in many instances the genetics of the individual plant are hidden from us if we merely view the expression of the trait of interest in a specific plant.

It’s crucial for researchers to develop better understanding and descriptions of the relationships between genes and traits.

This concept is maybe best explained with some real-world examples, that of seedlessness and berry skin colour. Both these examples are somewhat simplifi ed here for the purpose of brevity and clarity. In the case of the seedlessness trait, the gene AGL11 is understood to be the major determining factor. Two versions (alleles) of this gene potentially exist in grapevine, one leads to the formation of seeds, while the other prevents seed formation. Importantly, if both alleles exist in a single plant, seeds will not be formed. Meaning that the seedless allele is a so-called dominant gene.

Therefore, when one visually inspects a plant and fi nds it to be seedless one cannot determine if the gene for seed formation exists in this plant. In the case of berry colour a similar situation occurs. In this case the gene MYB1A is known to be the major controller of this trait. Once again two alleles of this gene can potentially occur, one leads to the formation of red skinned berries, while the other white skins. As before the one is dominant over the other, in this case the allele for red skin. Therefore, when one views white skinned berries in the vineyard one can be relatively sure of the underlying genetic alleles. However, plants with red skinned berries may or may not also contain the allele required for white berry skin formation.

This reality clearly has direct implications when it comes to breeding, as a cross between two seedless red cultivars can potentially yield a seeded white cultivar. However, while important, that is not the aspect I would like to highlight from this understanding of the molecular genetics of grapevine. Rather it is important to imagine what this means for other traits for which we do not yet understand the genetics (virtually all other traits).

Outside of the mildew resistance genes incorporated from wild grapevine, it’s likely that the genetic diversity we have in SA is much larger than assumed.

Practically this means we cannot know the genetic potential of a cultivar simply by observing the traits which it displays (and by implication this is even more evident for an entire germplasm). As highlighted above alleles linked to traits of interest can (and often are) hidden by alleles which are dominant. This is further complicated by the fact that many traits (likely the majority) are multigenic, meaning multiple genes contribute to the trait. The amount of hidden genetic potential in these cases is massive.

It is therefore crucial for researchers to develop better understanding and descriptions of the relationships between genes and traits as the use of molecular breeding is only as useful as the markers that have been developed. Indeed, the entire concept described above only makes practical sense in the context of molecular breeding. The merits of which are not discussed here, suffi ce to say that all prominent international breeding programs make use of marker assisted selection wherever possible.

Furthermore, importing material under the pretence that it contains genetic material which we do not possess in the South African germplasm, is in the majority of cases an exaggeration, or more likely an assumption. The reality is we simply do not know the genetic potential of our germplasm (nor that of the imported material).

In my opinion, efforts that go towards characterising the genetic potential of the local germplasm will have a much bigger impact on breeding in the long term. This will primarily be since characterising genetic potential will almost always lead to concomitant marker development for the trait under investigation. These markers could then immediately be used in breeding programs. Simply importing already bred material will leave us constantly in a state of playing catch-up, and potentially hindered by intellectual property patents.

Lastly, it is not to say that certain genetic alleles may not be present in SA. However, outside of the mildew resistance genes incorporated from wild grapevine, it’s likely that the genetic diversity we have in SA is much larger than assumed.