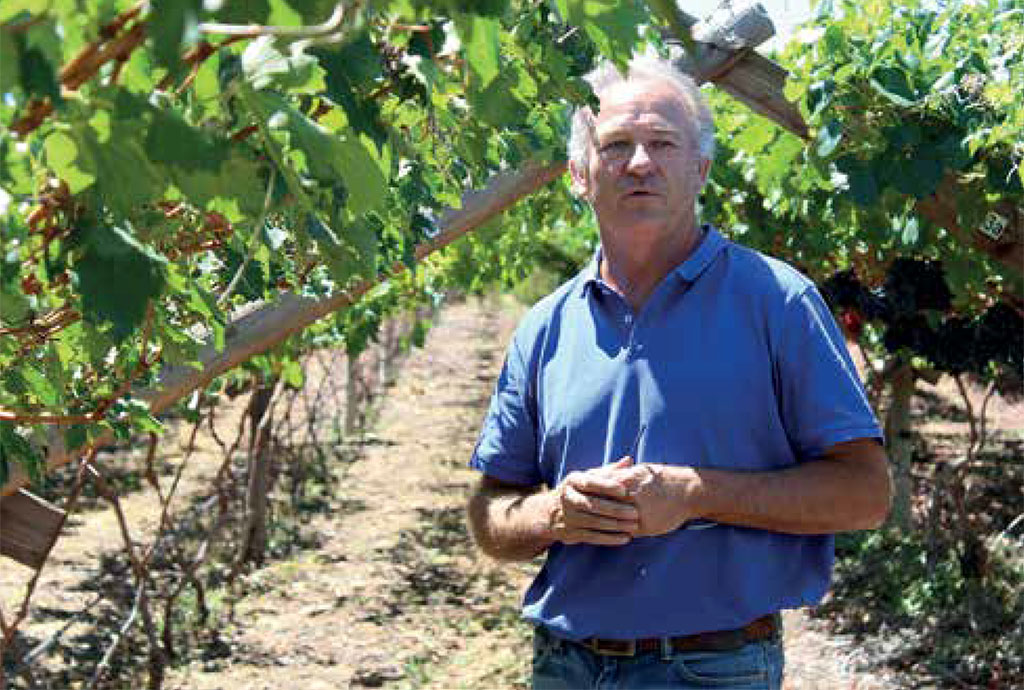 Main Image: Anthony Hill in the evaluation site on his farm, Buffelskraal.

In 2014 SATI initiated discussions and began actively engaging with the ARC, with the intention of agreeing on an approach that would give South African table grape producers more direct exposure to ARCbred table grape cultivars. It was SATI’s conviction that evaluating cultivars in each of the regions would facilitate the generation of more accurate information about each selection’s (cultivar’s) overall performance, while providing producers with evaluation results in “real-time”. At the start of these discussions, the ARC-bred cultivars were being bred, screened and evaluated on ARC research farms, largely based in the Western Cape. Consensus was reached between SATI and the ARC: table grape breeding was to be continued at Nietvoorbij and screening and evaluation could be done in industry, by industry (“industry-driven”). In 2016 SATI and the ARC formalised this arrangement by signing a material transfer agreement (MTA).

After signing the MTA, SATI contracted Anthony Hill, a commercial table grape producer in the Hex River Valley, to oversee implementation of industry-driven evaluation. Anthony has been involved with evaluating ARC-bred table cultivars for many years. To properly implement industry-driven evaluation, SATI needed to establish partnerships for each of the phases relating to evaluation or screening. Four key phases were identified:

Phase 1a (Breeding) is the phase during which new plants are bred, and is done at the ARC’s research facility, Nietvoorbij by Phyllis Burger.

Phase 1b (seedling screening) is the phase after breeding and is located on Bosman Adama’s nursery, Lelienfontein. The crossings made during breeding give rise to new seedlings, which need to be grown and assessed without manipulations.

Phase 2a (selection screening) Seedlings showing potential are selected and moved to this phase located on Buffelskraal in the Hex River Valley, and are assessed by Anthony Hill and other specialists. Bud material from the seedling site is grafted on rootstocks, and called selections.

SATI continues to support research projects that aim to enhance decisionmaking in terms of understanding the genetics and the selection of breeding parents.

Selections are screened by assessing their in-field responses to thinning and enlargement treatments, as well as their quality pre- and post-storage. Any selections that show promise in terms of these criteria are identified as “promising selections” and material can then move to Phase 2b (regional evaluation), which is done on contract by commercial table grape producers (called “Test Growers”).

These growers were identified by the regional table grape grower associations. The Test Growers in each region are listed below and so far, three “promising selections” have been transferred to at least one site in each of the regions for evaluation.

In addition to the partners listed above, SAPO Trust and Culdevco also play a role. SAPO Trust is responsible for regular virus testing of Phase 1a seedlings that have been identified to move to Phase 2a. They also assume responsibility during rapid multiplication of any cultivars that will be commercialised.

Culdevco has been contracted by ARC as the commercialisation partner for culitvars, which are to be commercialised as an outcome of “industry-driven” cultivar evaluation.

While the roll-out of “industry-driven” cultivar evaluation can now be considered complete, there is still much work to be done. The systems and structures will need continual improvement and streamlining. SATI will also continue to support research projects that will aim to enhance decision-making in terms of understanding the genetics and the selection of breeding parents.

Regions for evaluation of cultivars