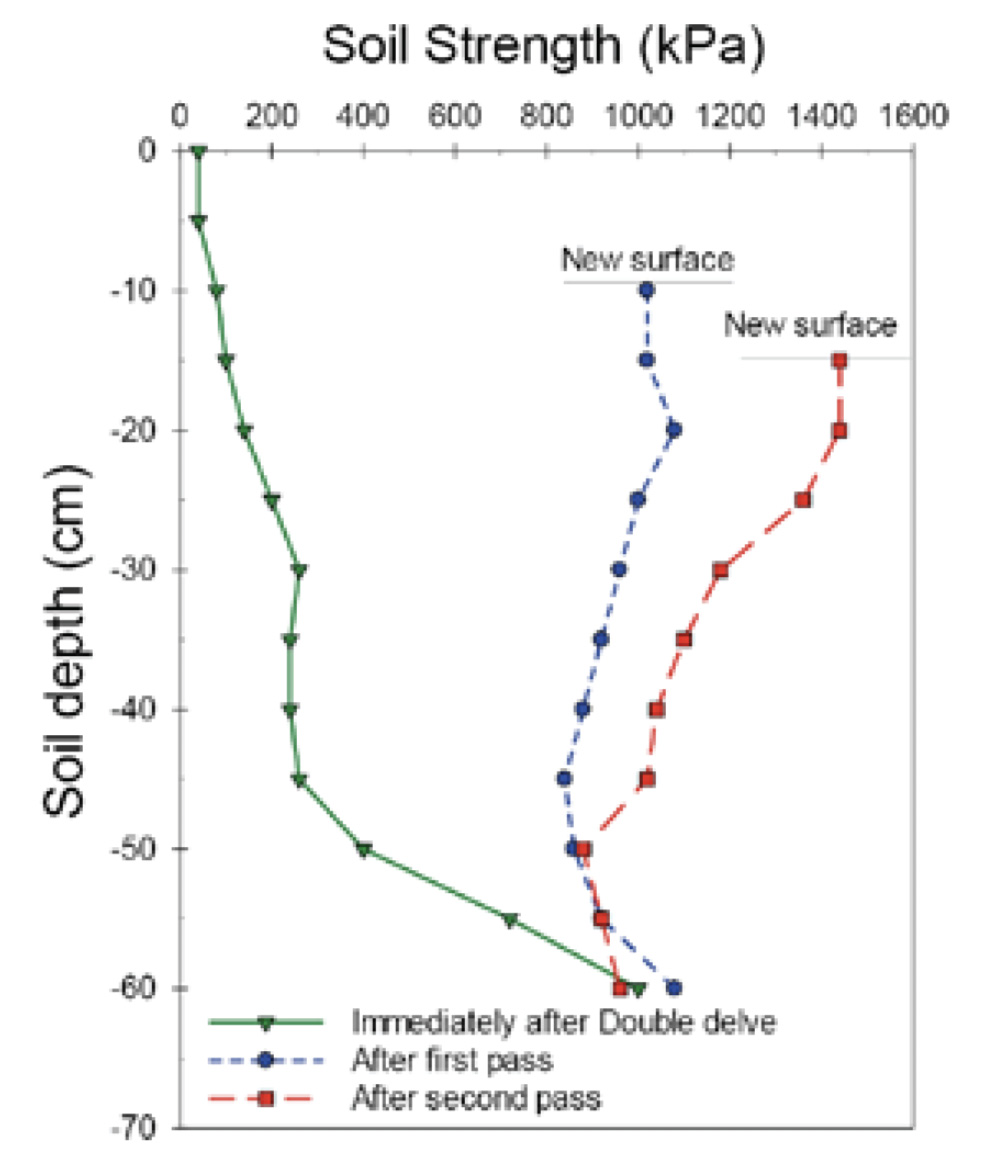 SATI and Winetech jointly funded the writing of the book Soil preparation for sustainable wine and table grape vineyards on all aspects of soil preparation. This new book has been completed and was launched on 14 August this year.

Conditions for effective
implement action Soil water content determines to a large extent the effectiveness of implement action during soil preparation. Soils that are too dry break up in large clods and require maximum draw power. Soils that are too wet when tilled, result in poor crumbling and wheel slip. Conditions for preparation are best when the soil surface is dry, to ensure good traction for tractors while the subsoil is still moist. Rippers and blade delving give better results when executed at drier conditions. The direction of tillage should be perpendicular to the contour, i.e. down-slope. Deep tillage in two directions may be necessary when a uniformly loose medium is not achieved with working in one direction or better mixing is required. The second tilling must be done at an angle of 60° to the first work direction. The cutting width of rippers is 66% of their working depth, while 60cm is normally recommended for a delve plough that works in conjunction with a ripper.

A key question regarding deep soil preparation has always been, “Will the soil re-compact and how long will it take?” The positive effects of deep soil preparation can become undone through re-compaction, which can either be man-made or it can occur through natural processes. Man-made processes include vehicle traffic such as tractors and other machinery, while soils re-compact naturally under their own weight and due to recurrent wetting by rain and irrigation. Some soils are more prone to consolidation than others. The grapevine root, however, does not make a distinction between natural and man-made soil compaction. Both types are equally harmful to the vine (Figure 6).
Tractor wheels cause serious compaction, with the first pass result-ing in the worst compaction down to as deep as 45cm. A second pass of tractor wheels increases soil strength significantly to a much shallower depth. Most man-made re-compaction happens in the first four months after planting of the vineyard. There-fore, the use of wheel tractors on newly prepared soil is advised against, until at least one year after planting. In existing vineyards re-compaction under the tractor tracks can sometimes be so severe that it requires deep loosening of the soil between the tracks. Re-compaction is a function of time and, amongst others, soil type. Studies in existing vineyards on Hutton/Clovelly, Cartref and Oakleaf/Tukulu soils showed that these soils are relatively stable against re-compaction. The beneficial effect of soil preparation was evident even 26 years after deep tillage had been done. The re-compaction that did take place, however, dictates deep tillage before planting a new vineyard. More research is necessary to predict which soils are prone to natural re-compaction. At this stage the recommendation to growers is to redo soil preparation on all soils after the productive lifetime (20-25 years) of a vineyard has expired.

Fig. 6: Re-compaction due to a varying number of passes by tractor wheels on loose soil (redrawn after Van Huyssteen, 1983)

Plant holes It is not uncommon to see young vineyards growing poorly and/or unevenly (Figure 7). Such unwanted results may have many causes, but root studies showed that this is often caused by re-compaction of wheel traffic on loosened soil before the vineyard was established; inadequate plant holes could also be to blame. In a case study, the reasons for uneven growth problems were investigated by means of root studies and the use of a penetrometer and bulk density determinations (Louw & Van Huyssteen, 1993). Their study showed that soil compaction, high soil strengths, and smeared planes are the main causes of problems related to plant holes. Roots having to grow from loose soil in a plant hole to more com-pact soil outside must force soil particles out of the way through longitudinal growth. Consequently, the medium from which the root is growing has to be firm enough to support the root section behind the tip. If not, the root will buckle (so-called root buckling stress: Figure 8) and grow in another direction. A good preventative measure will consequently be lightly stamping down the soil with which the plant holes are filled to support the roots. In the past, to save time and costs, growers have tried planting grapevines in small furrows made using a spade (Figure 9), or directly in ripper furrows, and even using crowbars in holes, having the diameter of the crowbar shaft. These practices restrict root development and shoot growth suffers as a consequence. In most soils, excepting very loose and sandy ones, a fork should be used to dig plant holes since it causes less compaction than a spade (Archer & Hunter, 2010). When spades are used to dig plant holes, a fork can be employed to just loosen the sides and bottom of the hole. This will allow roots to easily expand in all directions and to maximise the soil volume.
A potting effect can also be created by plant holes with smeared sides, round plant holes (Louw & Van Huyssteen, 1993) and plant holes in heavy-textured soils topped up with soil of a different, lighter texture, e.g. sand. Smearing and compaction of the sides of plant holes can be minimised by not working in soils that are too wet. As a rule of thumb, plant holes should not be dug if the soil still sticks to the spade. Furthermore, plant holes should not be re-filled with material – including organic material and inorganic fertiliser – other than what was removed while digging them. This will eliminate the risk of roots being restricted to lighter-textured porous material used to fill up plant holes in clayey soils. A disadvantage of round plant holes is the angle of incidence between root tips and the side of the hole. The larger the angle of incidence, the easier a root will grow parallel to the soil layer, instead of penetrating it. Square plant holes with uneven sides are the best.
Sophisticated grapevine machine planters are available on the market and will replace the manual planting of grapevines in future (Fig. 10). The principles that are involved to prevent root restrictions, however, remain the same.

Fig. 8: Buckling of a root caused by weak growth medium (not firm enough to support the root) behind the root tip. (PHOTO: WE WILDMAN, UNIV. CALIFORNIA, DAVIS

Fig. 9: Left, confined root systems shaped by compaction outside the plant hole and a small furrow made by a spade. The spade caused compaction on the sides of the furrow – right, provides a closer look.

Fig. 10: Grapevine planter used for the establishment of new vine-yards in SA. The planter is pulled by a tractor and does precision planting of grapevines at a fast rate. (PHOTO: JE HOFFMAN).

Roots illustrate visually the conditions they experience in the soil. Therefore, their distribution is important when soil preparation is planned or assessed. New technology makes root studies easier, but the use of root inspection in soil profile pits is still essential. The penetrometer is the ideal instrument to detect soil compaction and penetrometer resistances of more than 2000 kPa is considered restrictive to root growth. Methods to alleviate root restrictions depend on soil type. Fortunately we have experience and an array of implements available to provide a horse for each course. Effective soil preparation will result in soil loosened to 800 – 1000 mm without unloosened banks and large clods pre-sent, or poor subsoil that was brought to the surface.

The aspects discussed above are summaries of some chapters in the book Soil preparation for sustainable wine and table grape vineyards. These topics are discussed in much more detail in the book, featuring alongside others like root studies, root pruning, terracing, drainage, reclamation of brack soils and application of ameliorants. However, due to limited publishing space these topics don’t appear in the current article.