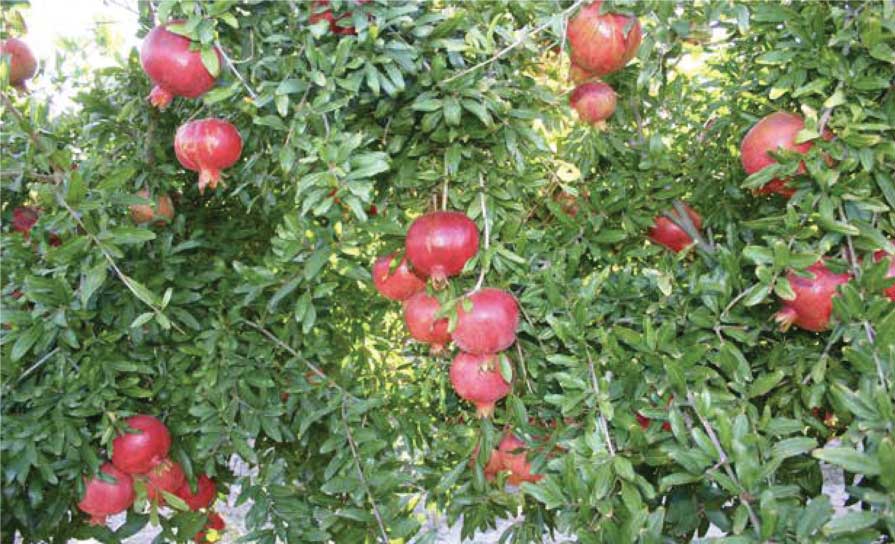 The Western Cape constitutes about three quarters of SA’s orchard area where pomegranates are cultivated. During 2017-2018, a critical drought period for the province, increased irrigation produced positive results in pomegranate orchard yield and selected fruit quality variables, despite orchards being from different production areas with dissimilar production practices.
Applying more irrigation increased fruit size at harvest and yield, improved aril weight and moisture content, as well as the percentage of fruit with
dark red arils. Sunburn also tended to have reduced.

Higher temperatures as a result of climate change are expected for the Western Cape, and pomegranates (Fig. 1) are a potential candidate for diversifying farm risk, due to its drought hardiness and ”superfood” fruit status (Beck, 2013). With the exception of cherries and prunes, the SA pomegranate industry is relatively small compared to most other deciduous fruits, comprising 932 ha planted, of which 68% is of the cultivar ‘Wonderful’ (Viljoen, 2018). Cherries and prunes have even less hectares planted (Hortgro, 2017). Due to limited local production guidelines for pomegranates, international guidelines are generally adapted.
Drs. T. Volschenk and A. R. Mulidzi, senior researcher and research team manager, respectively, of the Soil and Water Science Programme at ARC Infruitec-Nietvoorbij, are currently conducting a survey on the effect of current irrigation practices on pomegranate tree performance and fruit quality. The project is co-funded by the Pomegranate Producers Association of SA (POMASA). Baseline information collected will be used to guide more detailed irrigation research in the near future.

Figure 1. ‘Wonderful’ pomegranate trees shortly before harvest during the 2017/18 season.

Nine full-bearing pomegranate orchards of the cultivar ‘Wonderful’ were selected on commercial farms in four production areas in the Western Cape (Fig. 2). The selected regions included Bonnievale, Gouda, Wellington and Wolseley.
The selected sites represent the range of orchard variability that is currently present in the industry. Variability between pomegranate orchards includes orchard densities, soil type (such as sandy or heavier soil), whether the soil surface is level or ridged, micro-sprinkler or drip irrigated (single or double line) and with or without fixed net overhead. Soil profiles were characterised (Fig. 3) and water meters and soil water content sensors installed. Applied irrigation, soil water dynamics and plant response (physiology, growth, yield and fruit quality according to industry standards, (Figs. 4-6), were monitored.

Water restrictions and limited rainfall due to the Western Cape drought in the 2017/18 season prevented pomegranate producers from applying irrigation according to the tree water requirements. Useful preliminary information was collected regarding the effect of irrigation application on yield and fruit quality during times of drought. The amount of water applied in the nine different orchards ranged between 2 369 and 8 337 m3 ha-1 (237 – 834 mm) for the 2017/18 season. Roots in most orchards penetrated to a depth of 1.2 m and tended to proliferate in stony soils (Fig. 3). However, tree water status measurements (Fig. 4) indicated that orchards in some of the production areas were subjected to either moderate or severe water stress levels during the fruit growth and ripening stages, which impacted negatively on the fruit growth rate. Fruit growth rates tended to increase in line with increased amounts of irrigation water applied during the fruit set and linear fruit growth phases. Final fruit size, yield and average fruit weight also related positively with increased amounts of water applied until harvest. Total yield for the 2017/18 season varied between 21.9 and 60.3 tons ha-1. With regard to fruit quality, aril weight and moisture content and the percentage of fruit with dark red arils tended to increase with increased irrigation rate until harvest, but the trend was not consistent at all harvests. Fruit skin red colouration tended to decrease with an increased rate of irrigation until harvest. Fruit from all the orchards conformed to the ripeness standards expected for export. Pomegranate juice total titratable acids tended to increase, whereas the total soluble solids, pH and the matu-rity index decreased with an increased rate of irrigation until harvest. Sunburn for all nine orchards ranged between 22% and 61% of harvested fruit, whereas the amount of cracked fruit varied between less than 1% and 25%. The percentage of sunburnt fruit at harvest in orchards without nets increased with lower tree water status during the fruit growth stage. The total percentage of sunburnt fruit decreased with an increased rate of irrigation between fruit growth stage and ripening. However, these trends still have to be confirmed with more data.

Figure 2. Map indicating sites where baseline information regarding the effect of irrigation on pomegranate tree performance is being collected. CapeFarmMapper of the Western Cape Department of Agriculture was used to create the map.

Figure 3. Soil profile preparation (a) and (b) plotting root distribution in the orchard.

Figure 4. Measurement of midday pomegranate tree water status (a) using a pressure chamber. Leaves are enclosed in aluminium bags (b) for equilibration two hours before measurement.

Data for the first season was collected and preliminary trends established between irrigation water applied and pomegranate tree and fruit growth, yield and quality variables. In general, applying more water increased yield and fruit quality, and the occurrence of sunburn was reduced by the application of more water. Additional data – to be collected during the coming season – will aid in the interpretation of trends already observed.