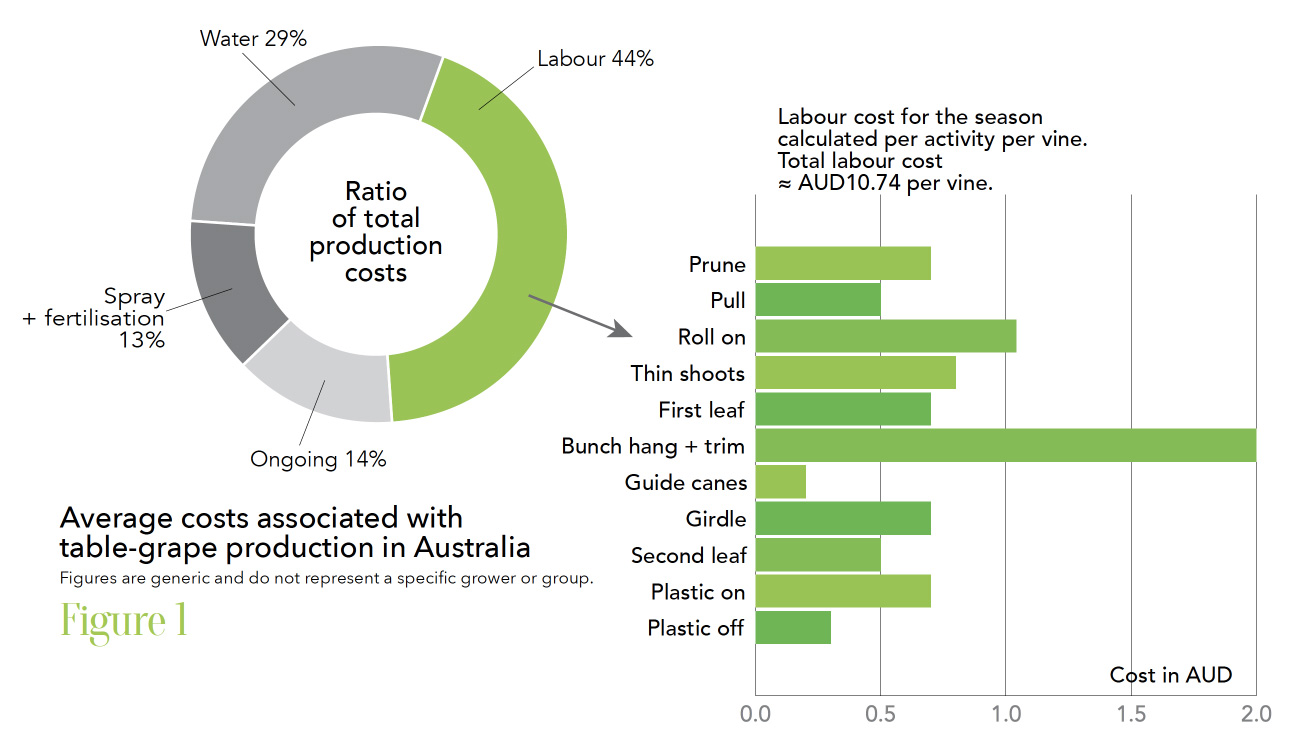 What South Africans can learn from Australian table grape producers

Agricultural technician Chris Potgieter moved to Australia in March this year to join the Costa group.
Costa is a leading producer and marketer of fresh fruit and vegetables. Potgieter shared lessons learnt from table grape production practices in a country with high labour costs. By Anna Mouton

Potgieter set the scene with a quote from his mentor, Wietz Botes of Dole SA: “Productivity and labour management in the South African table grape industry will in future become like that of the rest of the world.”

“Labour costs in Australia are very high,” conﬁrmed Potgieter, “but growers have found ways to make a proﬁ t. The past seven seasons have been good and there are big expansions happening. The table grape industry here is thriving.” Table grapes are produced in the states of Queensland, Western Australia and Victoria. Potgieter is based in Mildura, Victoria. Agriculture in this region draws water from the Murray River. “Water is expensive,” said Potgieter. “Not all of it belongs to growers or is linked to land, and water management is a challenge.” Winters in Mildura are cold and provide sufﬁcient chill units, but extreme heat in summer can be a problem. Temperatures rose above 40 °C on several days this past summer. And dust storms are on the increase. Potgieter believes that proximity to major markets is an important advantage for Australian growers. Time to market ranges from 12 days for Indonesia to 26 days for Thailand and Vietnam.

The right tool for the job

“I’ve learnt that Australians have tools for every job. Their thinking is that the better the tool, the more productive they’ll be, and the more money they’ll save. They always have equipment that makes their work easier and faster.” Potgieter gave the example of six men planting all the posts for a 2.5-hectare vineyard in a single day with the help of a water-jet post-hole digger. Pre-assembled trellises are another way to save time and money. The metal trellises are delivered to the vineyard and bolted onto the posts.
Pruning is partly mechanised by deploying a cane-stripper. The cane-stripper removes the long canes before the ﬁnal pruning is done by hand. One person can prune 600 – 700 vines per day, once they’ve been stripped. The disadvantage of the cane-stripper is that it requires a skilled driver. The handling of plastic covers is readily mechanised, thanks to the generous row widths. Other labour-saving practices include the use of spraying machines that spray two or three rows simultaneously. Potgieter has seen a pair of three-row sprayers cover a 100 hectare farm in a day and a half. “Row widths in Australia are anything from 3.65 – 3.35 metres with planting distances of 2.7 – 2.4 metres between vines and three vines to a panel.” The aim is to facilitate movement of machinery through the vineyard. Potgieter contrasted this with South African vineyards, which limit the use of machinery. One disadvantage of heavy machinery is soil compaction. “They drive down alternate rows with every spray event,” said Potgieter, “and they rip the rows after every season. But it remains a concern and needs to be managed.”

The rate for labour in Australia is up to AUD24.80 – close to R300.00 – per hour. Growers prefer contract labour, and most workers are unskilled migrants from the Paciﬁ c Islands and Asia. “Australians don’t focus on labour costs per hectare. It’s all about rate per activity per vine,” explained Potgieter. Yield is likewise measured in kilograms or boxes per vine. Vines are planted at 1 000 – 1 250 per hectare. Potgieter presented typical production costs per season – see ﬁ gure 1. “Everything is done the same here as in SA, except for trimming bunches. The Australians don’t remove laterals, so correct thinning is very important. There’s also no time for mechanical thinning or thinning berries by hand.” Bunches are trimmed to 5 – 7 laterals depending on the variety. Grapes are packed in the vineyard. Each worker has a cart with a scale and can pick 70 – 130 boxes weighing 8.5 kg per day. Boxes are left open in cold rooms overnight to cool down to a target temperature of
0°C – 0.5°C, before covering with a sulphur pad and sealing the following morning. The labour cost of harvesting and packing is AUD4.00 – 4.50 – about R50.00 – per 8.5 kg-box. Australian growers have managed to keep labour cost as a percentage of total production costs to around 35% – 45%, in spite of high wages. This percentage is similar to that for South African table grape production. “We deﬁnitely need to start thinking about how we can reduce labour costs in future so as to remain proﬁ table,” concluded Potgieter. He added that there is a global trend of less labour-intensive bunch preparation to thin berries through the use of plant growth regulators. Certain cultivars also require less bunch preparation and thus save costs.