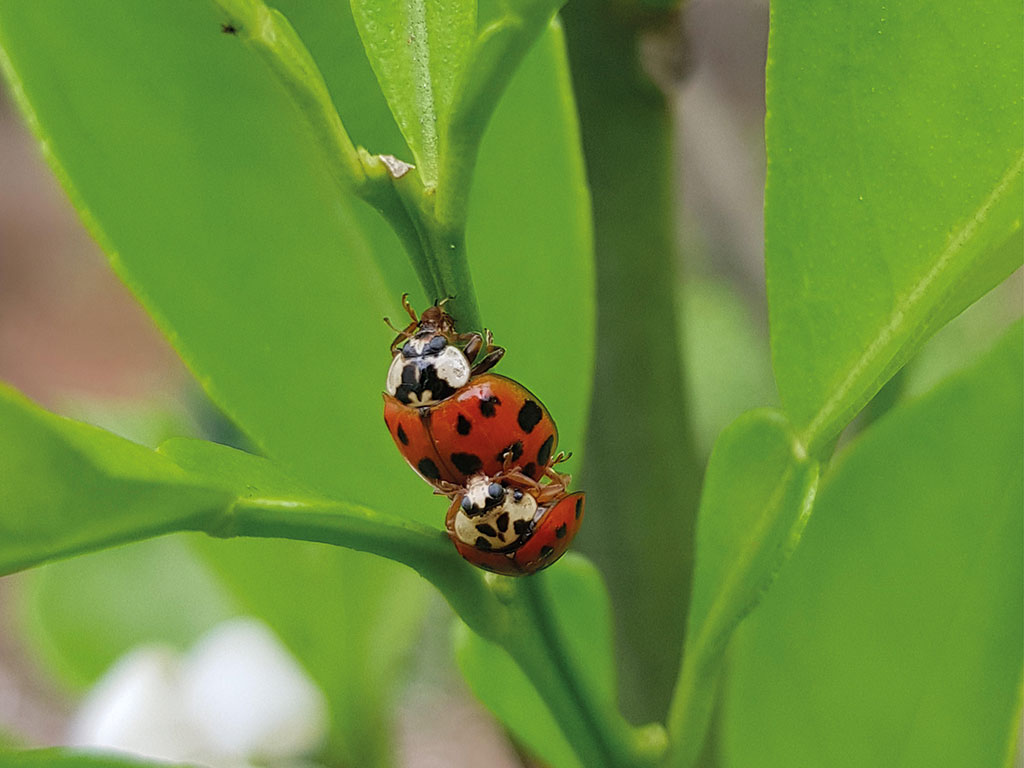 Beetle and bug: friend and foe

Icerya purchasi Maskell, commonly known as Australian Bug or Cottony cushion scale is native to Australia. Today, it can be found in numerous countries around the world and was probably spread through the movement of fruit or plant materials. It was first discovered in SA late in 1892 ,where it has since infiltrated all citrus growing regions of Southern Africa (Hamon and Easulo, 2005; Caltagirone and Doutt, 1989; Bedford et al., 1998).

Being polyphagous in nature, Australian Bug is able to complete its life cycle on up to 200 different plant species. These plant species can range from garden plants such as roses, to commercial citrus orchards (Hamon and Easulo, 2005). In citrus orchards Australian Bug typically infests the branches, twigs and leaves where they cause damage by sucking the sap of the plant.

Novius cardinalis (Mulsant) (previously Rodolia cardinalis) is commonly known as the Vedalia Beetle, and is native to Australia. After the beetle successfully controlled Australian Bug in the citrus orchards of California in the US in 1889, it was introduced in over 60 countries worldwide for the control of Australian Bug in agricultural fields (Hamon and Easulo, 2005; Grafton-Cardwell and Gu, 2003; Caltagirone and Doutt, 1989; Bedford et al., 1998).

The Vedalia Beetle’s success has been attributed to (1) its rapid generation times, approximately four to six weeks, relative to Australian Bug which can take up to three months to repeat one life cycle and (2) narrow feeding range (Causton et al., 2004). Adult Vedalia Beetles are oval in form and red in colour with black markings (Fig. 2A). In the orchards they can be distinguished from Harlequin ladybirds, Harmonia axyridis (Fig. 3), which are larger in size and have white markings on their pronotum. These white markings are absent in the Vedalia Beetles. All life stages of Vedalia Beetle, except pupae, are prolific feeders of Australian Bug (Cressman and Dumestre).

Insecticide intervention should only be considered as a last resort. Insecticides have significant adverse effects on Vedalia Beetles. Refer to the Citrus Research International production guidelines for more information on the management of Australian Bug.

A survey of Australian Bug and Vedalia Beetle in mandarin orchards

In the project, we also seek to mass rear the Vedalia Beetle and implement releases in affected orchards in periods when fewer insecticides are applied as well as shortly before harvest when insecticides with short residuals are applied.

Some preliminary findings of the survey

In the on-going study, infestation of Australian Bug was found to peak in mandarin orchards in Mpumalanga in July. There was a general decline in infestation thereafter and infestation was low in November. As many as seven to 80 individuals of Australian Bug could be found per branch during their peak of abundance, with the nymphs being the most prevalent life stage in all the orchards.

At the end of the season when the fruit have been harvested, aggressive spray programmes were implemented to control the increasing Australian Bug populations. This resulted in a steady decline in both Australian Bug and Vedalia populations from August to November.

We welcome any citrus farms that have experienced or are experiencing high numbers of Australian Bug within their mandarin orchards to participate in our study.

We welcome scouting records of Australian Bug for the years 2020 and 2021. Information on pest control practices, pruning practices and fertilization regime would be useful in understanding the dynamics of Australian Bug. We will treat all data received anonymously.

Thank you to all the farms who are already a part of this study, to CRI for funding, and a huge thank you to my colleagues for their endless support and enthusiasm for this project.

Caltagirone, L.E., and R.L. Doutt. 1989. “The history of the vedalia beetle importation to California and its impact on the development of biological control.” Annual Review of Entomology, 34, 1-16.

Hattingh, V. and B. Tate. 1995. “Effects of field-weathered residues of insect growth regulators on some Coccinellidae (Coleoptera) of economic importance as biocontrol agents. Bulletin of Entomological Research,” 85(4) 489 – 493.