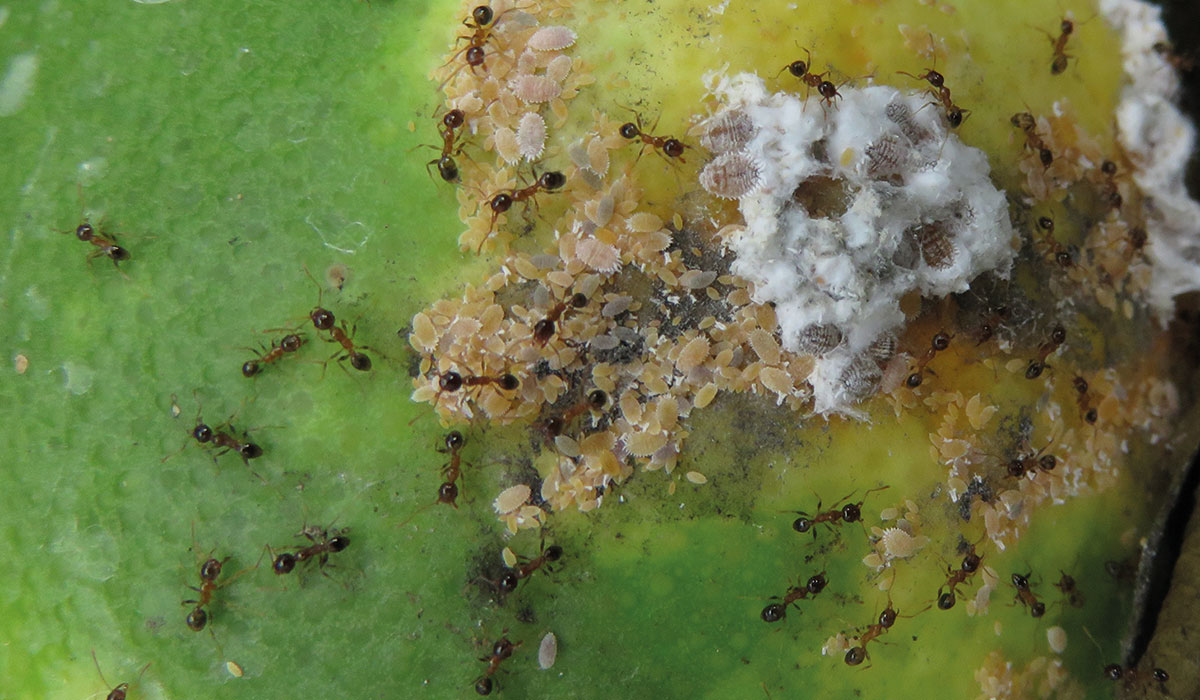 The presence of ants in citrus orchards can be altered from being a detrimental occurrence into a meaningful benefit to growers, if managed properly.

The pugnacious ant, Anoplolepis custodiens (Smith), and the brown house ant, Pheidole megacephala (Fabricius), are the most commonly found ants on citrus in Southern Africa and the most problematic, except in the Western Cape where the Argentine ant, Linepithema humile (Mayr), is often also a problem (Samways et al., 1998). Ants are considered important pests in citrus trees, not causing direct damage to citrus plants. They will defend honeydewproducing pests on citrus from their natural enemies and even transport their immature life stages to new foliage (Samways et al., 1982; Grout and Moore, 2015). This is especially important for pests such as mealybugs (Fig. 1), soft scales and waxy scales (Samways et al., 1982; Grout and Moore 2015). Apart from the phytosanitary status of some mealybug species for certain markets, the disruptive effect of ants will lead to increased honeydew and more resultant sooty mould, which could compromise the exportability of the fruit. Furthermore, the ants can disrupt the natural enemies of other pests, such as California red scale, causing outbreaks of these pests (Bedford, 1968).

This emphasizes the importance of keeping ants out of citrus trees. However, on the orchard floor, ants can act as an important and effective predator of arboreal pests that pupate in the soil, such as fruit flies, Ceratitis spp. (Wied.), bollworm, Helicoverpa armigera (Hüb) and false codling moth (FCM), Thaumatotibia leucotreta (Meyrick) (Bownes et al., 2014). In a research trial, pupae of these three species were planted in a citrus orchard in plots where the pugnacious ant and the brown house ant were poisoned, or where the trees were sticky-banded or in control plots where the ants were still active (Bownes et al., 2014). Pupal survival was significantly lower for all three species of pests in control plots and ant-banded plots, indicating significant predation by ants. Predation on FCM pupae (Fig. 2) was significantly higher than for the other two species, being recorded at almost 100%.

Consequently, the practice of barrier banding citrus trees to exclude ants, as opposed to eliminating them on the ground by poisoning, is strongly recommended (Samways and Buitendag, 1986; Grout and Moore, 2015). This can be a sticky barrier on a fibre foundation, which is the best option for pugnacious ant, or a chemical spray such as chlorpyrifos that is effective for 8 12 weeks against the brown house ant (or fipronil-lambda-cyhalothrin, as registered against Argentine ant). Furthermore, trees must be skirt-pruned to ensure that the only pathway to accessing the tree is the trunk, which is now blocked. Sticky barriers do not currently seem to be as widely commercially available as was once the case. However, there is still at least one product on the market and it is also fairly straightforward for growers to make their own, consisting of an inner polyester fibre layer, a stretch-wrap plastic film layer and an outer sticky layer. Consult CRI’s production guidelines (www. citrusres.com) for details. Furthermore, a new ant bait was recently registered and will be commercially available in 2021.

This is a bait that is effective against both brown house ant and pugnacious ant, and is applied in the crotch of the tree, thus having a similar effect as tree-banding, i.e. keeping ants out of the tree, without killing them on the orchard floor, where they perform as valuable predators of pest pupae.

In conclusion, the presence of ants in citrus orchards can be altered from being a detrimental occurrence into a meaningful benefit to growers, if managed properly, rather than simply eliminated. Consequently, restricting access to trees by ants through barrier banding or baitpoisoning within the tree is the most IPMcompatible and beneficial way to manage ants in citrus orchards.