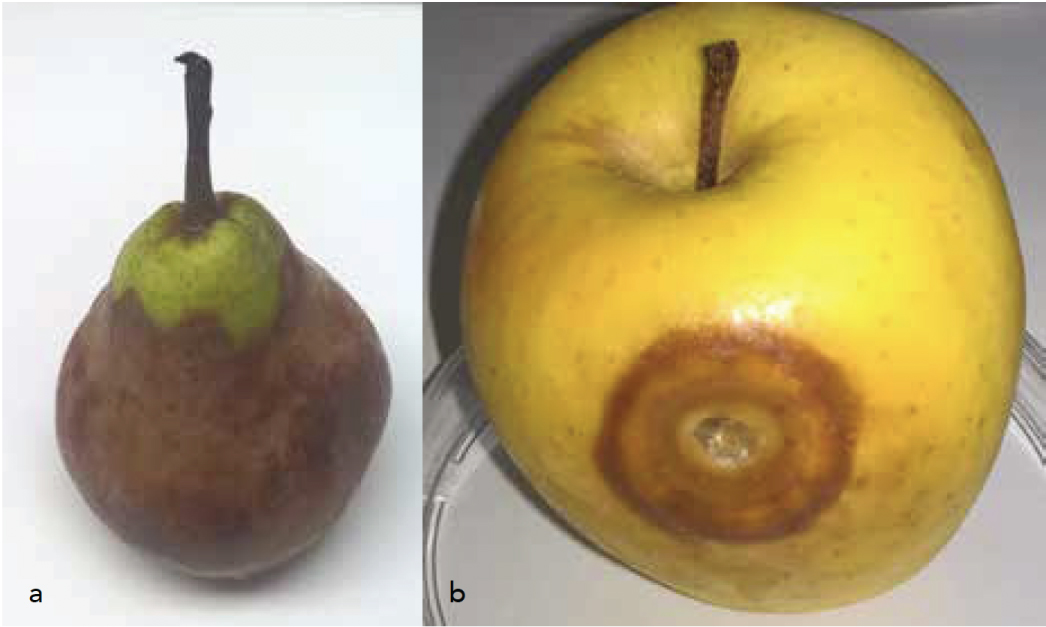 Significant storage diseases of pome fruit that have incurred losses of up to 70% (from single orchards), occur sporadically in consignments shipped to major Asian and European export destinations. With increasing consumer demands for fungicide-residue free produce, the development of a tool box, including alternative control measures, is essential to stay competitive.
Other incentives for research on fruit pathogen epidemiology include the current impact of drought stress and climate warming on the emergence of disease epidemics. Thus, the new integrated disease management arsenal starts in the orchard and includes cultural practices (orchard sanitation and harvest time); use of disease prediction models to forecast high infection risk, which allows timely application of fungicides; and resistance inducers. It also allows for the development of postharvest application of bioactive compounds and compounds generally regarded as safe (GRAS), as well as physical treatments (i.e. hot water).
Major postharvest pathogens on apple and pear fruit, grown in South African orchards are the latent fungal pathogens Botrytis cinerea and Neofabraea vagabunda. While fruit appears spotless at harvest, soft brown rot decay symptoms will develop for both pathogens, after several months in storage. The respective diseases caused by the two pathogens are grey mould (producing fluffy, grey sporulating mycelia) or bull’s eye rot (target-like appearance on fruit). Often, the symptoms of the primary disease-causing pathogens are masked due to secondary fungal pathogens, which require a wound such as blue mould to infect the fruit, causing Penicillium expansum.

The epidemiology of the bull’s eye rot causing N. vagabunda was elucidated in an MSc study by Jessica Rochefort and Dr. Alana den Breeyen, in Dr. Cheryl Lennox’s Fruit and Postharvest Pathology Programme at Stellenbosch University (SU). It un-covered the potential risk of pollinator crab apples harbouring fungal inoculum, and it highlights the importance of orchard sanitation (removal of rotten fruit) to reduce spore load in the orchard. No trunk cankers on apple trees were observed in the study, but they have been identified on stone fruit and pear trees elsewhere. Thus, monitoring for trunk cankers in neighbouring orchards is recommended. The study also described the occurrence of
N. vagabunda spores in the orchard throughout the various stages of fruit development, from December to April. The fungus infects fruit during rain events and then stays latent in the lenticel, until after storage. Thus, application of systemic fungicides (i.e. thiophanate methyl, pyraclostrobin) is recommended, especially preceding the months before harvest (Xiao and Jones, 2016). A current study is investigating the contribution of temperature and wetting periods to an increased risk of infection by this pathogen. Modelling of weather conditions can help farmers to apply fungicides appropriately before high risk infection periods.

Bioactive compounds have been isolated from biocontrol organ-isms such as Bacillus subtilise. The Process Engineering Department at SU in collaboration with the Plant Pathology Department (under leadership of Dr. Robbie Pott and Dr. Cheryl Lennox, respectively), is investigating production and application of such compounds on fruit. The advantage of these often volatile compounds is that they could be applied in the vapour phase (i.e. thermo fogging) in packhouses due to their thermostable nature, or as wax application due to their low solubility in water. An ongoing study, which forms part of an MSc study conducted by Sinovuyo Magwebu at SU, concerns the use of lipopeptides against infections of
B. cinerea, N. vagabunda and P. expansum. Promising GRAS products tested on apples in SA include garlic extract (Daniel et al. 2015) or citrus- and lemongrass essential oils on apples (Mbili et al. 2017). Crab shell-chitosan effectively inhibited mycelial growth of B. cinerea and Penicillium spp. on pomegranate (Munhuweyi et al. 2017). Its mode of action is partly direct fungi-toxicity, and also induction of natural plant defense responses. Similarly, recent studies overseas reported the effect of heat or hot water treatments to promote wound healing and to activate heat shock proteins, which are part of the natural host defense response. This extensive arsenal of alternative fungicidal compounds and cultural and physical practices to reduce fungal inoculum and infection, will ensure that the South African fruit producing industry stays competitive and delivers the best quality fruit to its consumers.