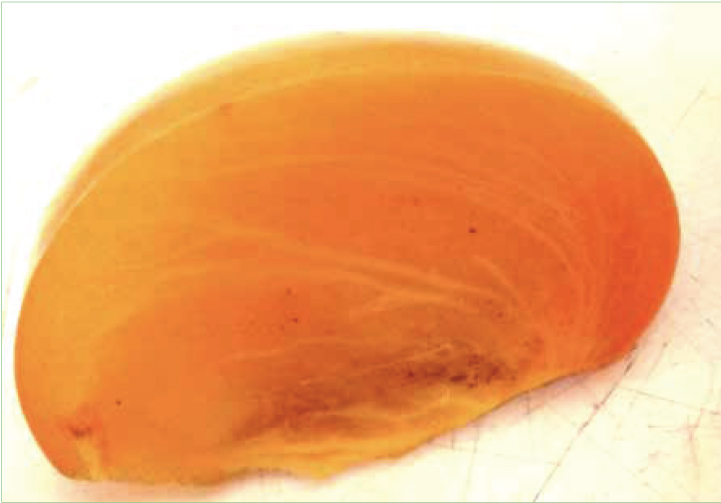 As the major producer of the persimmon fruit in the Southern Hemisphere, South Africa supplements the international market during the counter season of the Northern Hemisphere, especially the USA. The rigorous export protocols and aesthetics standards demanded by international markets have initiated the investigation of dark spots identified within the flesh of the South African persimmon fruit (Figure 1). A team of microscopists from the Central Analytical Facilities at Stellenbosch University, investigated the nature of these dark spots in the persimmon fruit using a high-end microscopy technique called correlative light and electron microscopy. This enabled the team to image a persimmon sample on multiple microscopes, locating precisely the same area, to harvest as much information of the sample as possible. The technique included marking each microscope slide with three coordinates; and using a specific software module each microscope is calibrated according to this coordinate system. Then the software can be used to locate the specific areas. For this study a polarised light microscope, a confocal laser scanning microscope and two different scanning electron microscopes were used, each of which provided different information of a sample.

Although it was brought to South Africa in the late 1990s, the Diospy-ros kaki persimmon fruit (also known as the Chinese apple), remains fairly unknown as a relatively new fruit on the South African market. The cultivar grown here [cultivar (cv.) Triumph] is a sweet seedless fruit without a core and is referred to as Sharon fruit, after the Sharon plain in Israel where this specific cultivar originates from. Persimmons are deciduous, grow well in warm-temperate and sub-tropic areas, and tolerate the hot and humid coastal areas with the best temperature for fruit growth and sugar accumulations ranging between 20-25˚C. The challenges of finding the perfect region in South Africa to meet the climatic requirements to grow the exotic fruit took well over a decade. The Overberg region in the Western Cape was found to be ideally suited, with production now flourish-ing in the region, and export opportunities expanding. The fruit can be classified as astringent or non-astringent, based on its flavour in maturity, as well as its genetic characteristic of natural astringency. Astringency in persimmon fruit is the result of soluble tannins, which are accumulated in vacuoles of idioblasts from parenchyma cells in the flesh, called tannin cells. A young develop-ing persimmon fruit is highly astringent due to soluble tannins, but some cultivars lose astringency naturally on the tree as the fruit develops. These are called the non-astringent cultivars.

Figure 1. Wedges of persimmon fruit with black dots visible close to the core of the fruit.

Microscopy of the South African Persimmon

The black spots – which are of particular interest for this study
– were not evenly distributed in the persimmon fruit tissue. The highest number of black spots were found within a 1 cm radius of the core of the fruit. These spots were quite small, but extremely abundant. Larger black/brown spots were found sparsely distributed in the flesh of the fruit, or just beneath the skin of the fruit. The majority of the flesh further than 1 cm from the core did not show any black spots. Frozen persimmon samples were prepared for microscopy by making semi-thin cryosections on microscope slides. Transmission light microscopy and scanning electron microscopy revealed that the majority of the tissue in the flesh and under the skin consisted of the typical parenchymal structure, while the tissue around the core included more vascular structures.

With scanning electron microscopy (SEM) an electron gun produces a focused beam of electrons as a source of illumination. Upon interaction of the electron beam with the sample, different signals can be detected, such as low energy secondary electrons, or high energy backscattered electrons. As the electron beam is scanned across the sample, different images are produced with the various signals providing information of the topography, as well as the composition of the samples. Some rigid cellular structures were distributed throughout the tissue, regardless of whether the tissue was harvested from the core, the flesh or the skin area. These rigid structures have been identified as tannin cells. Transmission light microscopy further showed variation in colouration of the tannin cells, variation that was not revealed in any way by SEM. Some tannin cells were much darker in colour, while others had a very similar colour to the surrounding parenchyma cells. The darker brown tannin cells were associated with the black spots visible in the fruit, while lighter tannin cells were microscopic. The samples were investigated for their auto-fluorescent properties using a confocal microscope with a range of lasers at different wavelengths. Confocal microscopy is a type of fluorescence microscopy that makes use of lasers to stimulate molecules within samples to emit light of a specific colour (fluorescence). It is used to scan through a sample to determine the localisation of specific molecules of interest, or the natural fluorescence of the sample. Some cell walls of the parenchyma cells showed auto-fluorescence, but most of the cellular content was not fluorescent. Some bigger cells, presumably tannin cells, were filled completely with violet/blue autofluorescence. Only in some cases, the tannin cells had a strong red autofluorescent signal. Correlating light microscopy and confocal microscopy images, the same areas were investigated and the team found that these red auto-fluorescent cells were identified as the dark brown cells, which are visible with the naked eye as the dark spots in the fruit (Figure 2). The significant auto-fluorescence of these large cells was confirmation that the cells were indeed tannin cells, as tannins and other aromatic compounds are known to exhibit autofluorescence.

Samples that were correlated between the confocal microscope and another SEM to identify the differently coloured tannin cells (Figure 3), were chemically analysed for nutritional content by semi-quantitative Wave Dispersive X-Ray spectroscopy (WDS). The SEM system is designed to perform high-resolution imaging concurrently with quantitative analysis of elements, with the benefit of localisation of the elements. Several violet and red fluorescent tannin cells were individually analysed for their mineral content, which revealed that three elements were elevated to various extents in the red fluorescent tannin cells, compared to the violet fluorescent cells, namely sodium, calcium and potassium. Further studies of the nutritional distribution, the fluorescent compounds, subsequent changes with ripening and the relation of these factors to astringency are recommended, but were outside the scope of this study.

Figure 3. A) Confocal microscopy image with B) the corresponding SEM image of the exact same area to identify the red and violet fluorescent tannin cells for further chemical analysis.

The techniques demonstrated here provide excellent new ways to determine localised accumulation of nutrients and other compounds in fruits. The correlation between four microscopes in this study provided a way to localise specific cells visible to the naked eye as black spots for further analysis. The auto-fluorescent nature of these cells can be analysed with confocal microscopy, the rigid morphology of the cells with scanning electron microscopy and elemental informa-tion of the dark and light tannin cells using wave dispersive X-ray spectroscopy. Since there is very little research done on the persimmon produced in South Africa, this type of study could reveal the unique nature of our locally produced product.